The third golden statue of Phramonkolthepmuni (Sodh Candasaro), the the founder of Dhammakaya Tradition, will be cast out of pure gold to mark his 121st anniversary on Monday 10th October 2005 at the Dhammakaya Assembly Hall , Dhammakaya Temple, Thailand. The cast statue will later be enshrined in the main chapel of Wat Bot, Bang-koo-weang, Nonthaburi Province. Wat Bot was the place where he had dedicated his life with the hope to attain enlightenment. Finally, he had rediscovered Vijja Dhammakaya -- the Supreme Knowledge of the Lord Buddha. For the rest of his life, he restlessly devoted himself to teach disciples to attain Dhammakaya after him. On this occasion, all his disciples throughout the world led by Phra Rajbhavanavisudh, in recognition of their huge debt of gratitude to the Great Teacher, will create a live-size statue of Phramonkolthepmuni in solid gold as an object of veneration and symbol of the teaching of Vijja Dhammakaya. You are now invited to join this consecrated event on Monday 10th October 2005 at the auspicious time of 5.00 p.m. 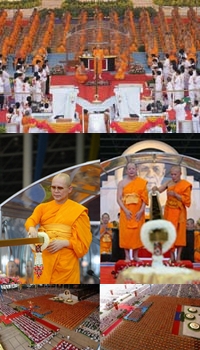 Phra Rajbhavanavisudh and the Sangha

Gold and the metal ballpiece on the slope rail 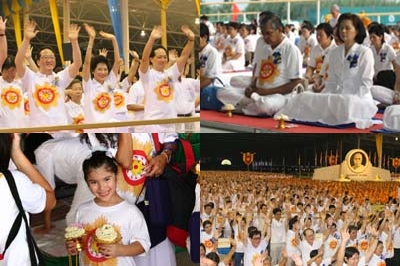 All folks of life hand-in-hand & heart-to-heart